Unitarian Universalist have long been Siding with Love, making our liberal faith early supporters of the LGBTQ community. The Stonewall Riots, a turning point and watershed for the modern LGBTQ equality movement, began on June 28, 1969, giving voice to the frustrations over the persecution, silencing, criminalization, and denial LGBTQ people were facing. By the next year, June 28, 1970, a couple of US cities began holding Gay Pride marches.

It was that same year, 1970, the Unitarian Universalist Association first passed a resolution to work to end discrimination against gays, lesbians, and bisexuals. By 1984, UUs affirmed the practice of performing marriage ceremonies for LGBTQ individuals, 30 years ahead of the US Supreme Court decision that legalized marriage equality across the country.

First Universalist is a Welcoming Congregation, a recognition received by those UU churches that promote radical inclusion, strive to rid ourselves of homophobia and transphobia, and engage in anti-discrimination work. Aligned with the UUA’s Five Practices of Welcome Renewal, in 2020 First Universalist will be taking inventory of our Congregation’s welcoming in worship services, days of observance, ongoing learning, and commitment to support the dignity and wellness of of LGBTQ communities.

In the past, we have hosted discussion panels, operated a phone bank in support of marriage equality, and worked to become a certified Welcoming Congregation, and currently, we offer the Our Whole Lives inclusive human sexuality program.

Pride Portland!
First Universalist, alongside other Unitarian Universalist churches in Maine, other faith communities, non-profit organizations, and members of the LGBTQ community, marches in the annual Pride Portland! parade. 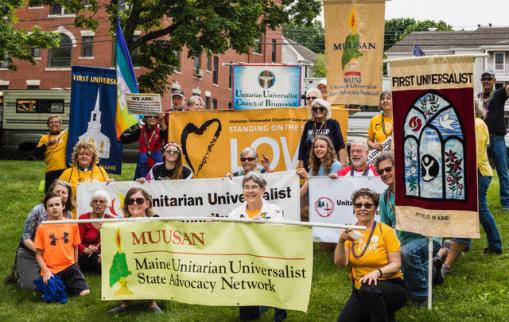 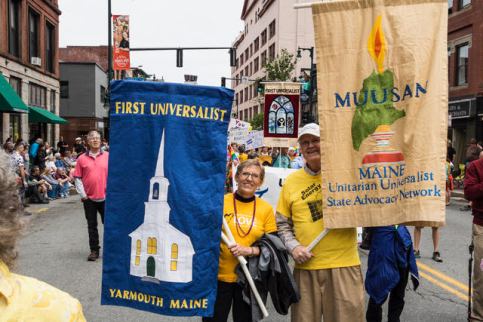